March is the greatest month (because BASKETBALL) 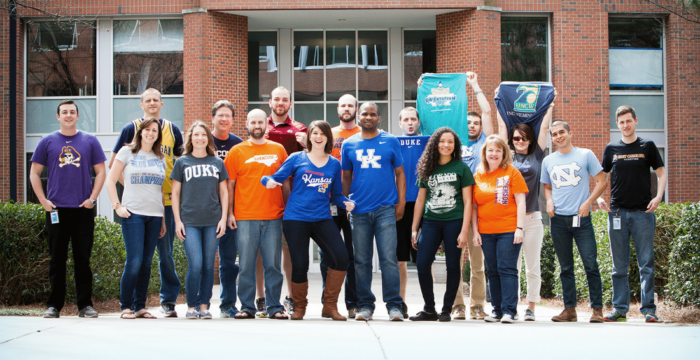 It’s here!  The brackets are set and now we watch.  We cheer.  We cringe.  We taunt our friends and coworkers unrelentlessly as the 15 seed we picked beats their number 2 seed.

This year is even more fun for us, because Raleigh is one of eight host cities that has first and second round games this weekend.  And everyone wants to go.  We get to show off this great city!  And watch basketball.  Score!  Who’s coming to Raleigh?  Texas Tech, Butler, UVA, Hampton, UNC (okay – we’re probably all going to this game on Thursday), Florida Gulf Coast or Fairleigh Dickinson, USC and Providence.  Pretty awesome lineup, if you ask us.

Bandwidth is located right in the middle of the NC State campus.  So, if you think we have a few members of the Wolfpack among us, you’d be right.  Try being a Wake Forest fan, like myself.  And losing in the first round of the ACC Tournament last week to NC State, losing any hope of an inspiring return to greatness that would place your school in it’s long lost place of tournament teams.  Very little sympathy was shown.  Of course, the Wolfpack fans were ultimately left out of the tournament as well, so we’ll have to root for our brackets instead of our teams.

But we’re not just a company of NC State fans and a lone Demon Deacon.  There are many Tarheel fans who delight in wearing baby blue to work for a month.  Others simply stomach that because we otherwise like our coworkers very much.

And then, there’s all the Duke fans.  Moving on.

Of course, we’re not all for the three powerhouse schools in the area.  Many of us stand alone and cheer for our “other” schools.  Or, like me, left without a team in the tournament, but with a strong love for basketball, we turn to cheer for our brackets.

It’s rare that I get an email from my office on Sunday (really – it’s true!), so when I do, I always read them right away, thinking something important is happening.  This weekend was no exception.  Something very important is happening – Basketball!  As soon as the teams were announced, there was an email in my inbox from David Morken, the CEO of Bandwidth, inviting everyone to participate in the company’s bracket challenge.  No money exchanges hands, but you can bet there will be more than the fair share of friendly jabs over the next few weeks.  And of course, everyone wants to win – not just for the bragging rights, but because there’s a night on the town at stake.  The winner receives: 1st: Dinner for two at the best restaurant in your city. 2nd: Dinner for two at an amazing restaurant in your city. 3rd: Dinner for two at a great restaurant in your city!

The next three weeks will be filled with excitement for us at work as we cheer for our teams, and as we participate in our own March invention –  an annual cornhole tournament, complete with brackets, costumes (uniforms?), and of course – the ultimate prize of bragging rights.

March is the greatest month because whether your team, your company’s team, or your neighbor’s bracket is doing well, we all have something to cheer for.  There’s a sense of community surrounding the tournament that permeates an office like Bandwidth and gets everyone excited.  Though we all pull for whoever our team is, we love doing it together.

If you haven’t lived in a basketball state or worked for a company the loves March like we do, I highly recommend it.  In fact, we’re hiring, so check that out.

Anyone needing to update your out of office reply to a more honest message for the next few weeks is free to borrow this:
Please expect a delayed response to your message.  Because Basketball.