The blue campus call box is now in students’ hands When I was in college, one of the most significant symbols of student safety was that big blue call box you’d find every hundred yards (or so?) around campus. Though I never felt particularly unsafe on campus grounds, I can’t say it was because of those blue call boxes. For one, they were usually far enough away at any given time that whatever transgression I could imagine occurring would be long over before I ever reached a box. Since most of us college students didn’t have cell phones at the time (if you had one, you only used it in the car—we called these “car phones”), the boxes were better than nothing, for sure. However, I might have been more likely to run (if I could) to a nearby dorm and find a friend rather than pick up that blue phone.

That was 20+ years ago, and while EVERYTHING about how mobile communications has changed, many universities across the country are still relying on those same blue boxes to help keep students safe. Last year, I had the pleasure of talking with the CEO of one of Bandwidth’s most innovative customers, BlueLight—a company that’s making complete reliance on those blue call boxes a thing of the past (and finally bringing college campuses and personal safety into the 21st century!).

BlueLight used Bandwidth’s Communications API Platform to develop the latest iteration of its safety app that’s being used on hundreds of campuses nationwide. The service is pretty neat in that everything is based around your smartphone’s GPS capabilities and help is always a tap of your phone away (literally – we’re talking 1-touch dialing!).

For those of us whose first mobile phone looked something like this, it’s incredible to see the ways that today’s technology—and the awesome software companies Bandwidth works with—are changing the way people connect with each other. 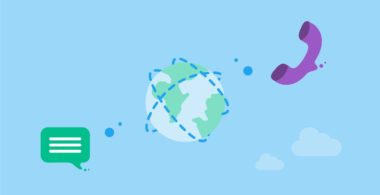