As enterprises increasingly adopt innovative communications platform capabilities in the workplace, it’s become increasingly imperative that their 911 calling capabilities keep pace as well. As a result, the FCC has recently adopted new regulations aimed at ensuring that the advanced communications tools used in an enterprise environment continue to support critical end users’ emergency  response needs–when and where they’re necessary.

Signed into law in 2018, RAY BAUM’S Act emphasizes the importance of sharing precise location information when calling 911, which is invaluable to first responders in locating callers and can dramatically increase the potential for better emergency outcomes.

What is RAY BAUM’s Act?

Named in honour of Ray Baum (more on him below), RAY BAUM’s Act is also an acronym that stands for Repack Airwaves Yielding Better Access for Users of Modern Services.  While the Act in its entirety includes many different communications related initiatives, Section 506 of the Act is what Bandwidth is particularly focused on with its 911 emergency services for enterprises.

Who was Ray Baum?

Ray Baum described himself as “just a small town lawyer” but he went on to serve in a number of important public roles at the state and federal level in Oregon and in Washington D.C. over the course of his career. Ray was a Commissioner and Chairman of the Oregon Public Utilities Commission (PUC), served on the Board of Directors of the National Association of Regulatory Utility Commissioners (NARUC), and as the Chair of NARUC’s Committee on Telecommunications.

Following his service on the Oregon PUC, Ray joined U.S. Representative Greg Walden’s staff as Staff Director on the Energy and Commerce Committee. In this role in Congress Ray worked closely with the FCC on telecommunications issues. Sadly, Ray Baum passed away in February of 2018 after a long battle with cancer. Following Ray’s passing, in recognition of his important contributions to the telecommunications industry, Representative Greg Walden, arranged to have RAY BAUM’S Act named in his honor.

The language of Section 506 of RAY BAUM’S Act directed the FCC to conclude a proceeding aimed at improving the  “dispatchable location” information provided to public safety at the time of a 911 call. In the FCC’s proceeding that followed, it determined that dispatchable location includes a street address, but should also include more granular information such as building number, floor, suite, room, or other available relevant location information that can best assist first responders in an emergency.

When does RAY BAUM’S Act go into effect?

The FCC’s new rules were published in the December 6, 2019 Federal Register. In accordance with the FCC’s order implementing RAY BAUM’S Act, the initial compliance dates for the Section 506 “dispatchable location” components of RAY BAUM’S Act are:

What does RAY BAUM’S Act mean for your business?

First, we strongly urge impacted enterprises to speak with legal counsel for guidance. The best legal approach  for any given enterprise may vary depending upon the nature of the services in question or the size and complexity of your organization.

Third, you will need to plan for workers who may be using nomadic services such as softphone applications on a laptop or other mobile devices. Many companies we work with are transitioning away from traditional, fixed desktop phones. They will likely need to adjust how they manage their emergency location information to account for new nomadic communications services that commonly allow employees to work in the office and remotely.

Finally, endpoints need to be tested to ensure that the correct emergency location information will be conveyed to public safety during a 911 call. Such testing might ordinarily require contacting and coordinating with appropriate 911 call centers, but Bandwidth offers an easy to use alternative testing service (“933”).  Bandwidth’s 933 testing service allows enterprises to test the emergency calling capabilities on their phones without actually dialing 911 (which may otherwise risk detracting resources from true emergencies). 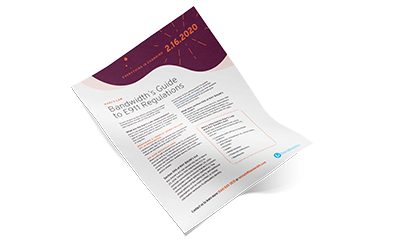 How is RAY BAUM’S Act related to Kari’s Law?

Both Kari’s Law and Section 506 of RAY BAUM’S Act deal with E911 and MLTS. Kari’s Law has two requirements:

Kari’s Law (which goes into effect on February 16, 2020) focuses on ensuring that end-users have the ability to make calls to 911 in enterprise environments while notifying the enterprise of the emergency. Section 506 of RAY BAUM’S Act is concerned with the quality of the information that’s sent to public safety operators when the call is made. Together, they’re all about providing better, faster, more reliable access to emergency services when dialing 911.

Getting your business ready for the new 911 requirements in RAY BAUM’S Act can seem daunting. Fortunately, you don’t have to do it by yourself. Bandwidth’s team of experts can help you manage the new requirements of both RAY BAUM’S Act and Kari’s Law with our full suite of 911 Access solutions.

Get in touch with our experts to learn more about RAY BAUM'S Act and other 911 regulations.

Back to Basics: Messaging 101