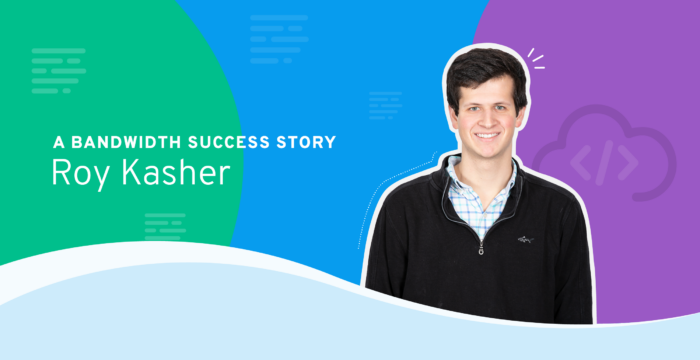 Hi! My name is Roy, and I am a developer at Bandwidth. Being a developer is a real dream come true for me. To understand my story, we need to rewind all the way back to 2016 when I was an eager freshman at the University of South Carolina planning to major in Economics.

Pretty early on during my first semester an opportunity came about to get involved in undergraduate research. I jumped on it and started teaching myself Python and making contributions to our open source repo. That experience motivated me to add a computer science minor to my studies. When I graduated from college, I knew that I wanted to be a software developer; I just didn’t have a complete toolkit yet.

I graduated from college a few years later without a clear idea of what type of role I was looking for. I decided that the best thing to do was to join a tech company and figure it out from there. So I applied to a rapidly growing company in the area where my then girlfriend and now wife lived, Raleigh, North Carolina. After a phone screening and a round of interviews, I found myself with my first job as a Billing Analyst on the Operations team at Bandwidth.

After an expedient onboarding and some mentorship from my then ‘billing buddy’ but soon to be mentor, Ellis Rushford, I hit the ground running. On a team that let me ask why, I found many ways to challenge the status quo and work with my leadership to implement changes that improved efficiency, and more importantly freed up my teammates and I to do more meaningful work. Here are some lessons that I learned during that time:

At Bandwidth there is a culture that encourages asking questions and reaching out to people around the company to learn. That is exactly what happened on an ordinary Thursday in 2021.

I was working on a tool for the Billing Operations team and in considering the best way to go about a technical decision, I reached out to Henry Walsh (a software developer on the Billing Development team). After a 5-10 minute conversation about the technical problem, Henry asked me about my aspirations and took an interest in me as a person. We discussed my studies and experience. At the end of our meeting, he urged me to reach out to his manager, Will Licamele and express my interest in becoming a Software Developer.

Will and I had a couple of one-on-one meetings where we discussed the potential of me becoming a Software Developer on his team. As much as I was excited, I was equally terrified. I didn’t have a Computer Science degree. I hadn’t ever had a professional PR review. And I surely had an intense case of Imposter syndrome.

Will saw through that and understood the synergy between my breadth of domain knowledge and my ability to learn. His belief in me transformed into my own belief that I could do it. I could achieve this dream of being a Software Developer.

August 2022 will mark one year for me as a Software Developer at Bandwidth. A major milestone for me in my software development career. And, I’d like to extend my warmest and most sincere thank you to Henry and Will for believing and investing in me.

I’d also like to take this opportunity to share a couple more thank yous. I am very grateful to the entire Billing Development team and in particular, the ‘Derecho Pod’ for entertaining my questions and showing me the ropes.

Lastly, I would like to thank Bandwidth for allowing people from the bottom-up to ask questions and seek mentorship. My story is not one of a kind. I know many people at Bandwidth who worked hard and found a way to move into their dream career path. I believe that a lot of this comes back to one of Bandwidth’s core beliefs: “Work for and love the success of others”.

In the future, I intend to pay forward all of the lessons and mentorship to others. Hopefully, I get the opportunity to invest my time and energy into the next Bandwidth success story. I’m sure that there will be many.

I think that the number one piece of advice I would give to someone who is trying to enter a new career path is to seek out a culture that encourages you to ask questions and empowers you to try new things. Be somewhere that it’s not only okay to fail, but it’s celebrated to try. My story should be a message to managers. Sometimes the talent you are looking for is already within your walls. Homegrown talent is both extremely rewarding for the people involved and helpful to diversifying the perspective of the individuals on the team.

Interested in joining the software development team at Bandwidth? View open positions around the world