3 Things I Heard at Microsoft Ignite 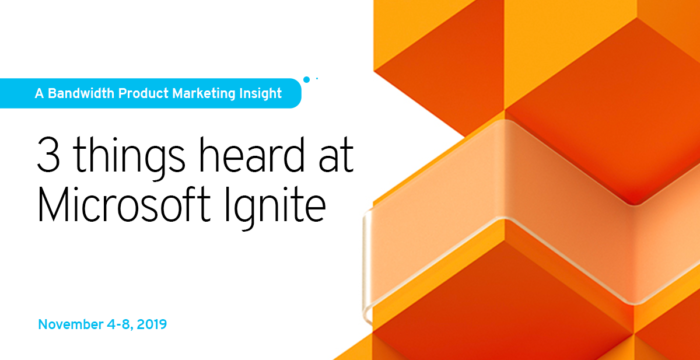 I have a love/hate relationship with trade shows that goes back decades. On the one hand, it’s a rare privilege to catch up in person with prospects and customers and hear what’s going on in their world. On the other hand, the hours are long and exhausting, so it helps to have a side project. For Microsoft Ignite last week, mine was keeping track of the conversational themes that kept coming up at the Bandwidth booth.

Full disclosure: my favorite quotes from Orlando were not heard on the show floor, but at the Uber/Lyft pick up area outside the convention center, which was snarled with long lines and slow traffic every evening after the event closed. Unfortunately, none of those comments were fit to print for a general audience, so I’ll stick with the ones related to IT topics within the enterprise:

“Where can I get one of your sparkly jackets?” The last one isn’t IT related, so it doesn’t count except that it was the most surprising and funny to me. Bandwidth’s bold, bright jackets continue to be a crowd favorite at IT conferences, so any stereotypes I carried about techies being indifferent to fashion have been eliminated forever.

These were just the most common things I heard about Microsoft Ignite. It was an amazing conference, and while exhausting, it was great getting to connect with everyone. If you’re ready to talk about your telephony, E911 regulations, or SBCs, drop us a line. Our experts are here to answer all your questions around number porting, migrating to the cloud, and upcoming 911 regulations.

Talk to an Expert E911 for VoIP and UC

E911 for VoIP and UC Learn about Number Porting 6 challenges facing financial services in 2023, and …