Hi. Okay…we know you’re tech savvy. So we’re not going to waste your time with questions straight out of SMS 101. Instead, we’ll explain what SMS-enabled phone numbers are and what you should be looking for when you decide you need them.

With over 5 billion text messages sent every day over America’s wireless networks, SMS messaging is emerging as a true growth market. Applications that enable users to communicate from their mobile devices using SMS-enabled numbers (also known as long codes) are soaring in popularity. Right now, the only limits are an application developer’s imagination—and a source for SMS-enabled phone numbers.

Wait. You just said “long codes.” What are long codes?

Are SMS-enabled phone numbers hard to get?

For VoIP-based messaging providers, breaking into the SMS world is no simple task. In the U.S., two messaging aggregators own the binds with wireless operators. Those aggregators are highly selective about where their network traffic originates, so working through them directly to reach the carriers they support is not typically an option.

You should also know that some Tier 1 wireless carriers are equally selective about who they will or will not accept messaging from: if they don’t know you, they will treat your SMS traffic as suspect and may block its delivery to their subscribers. These dynamics can create major hurdles for those interested in using SMS-enabled phone numbers in their application or service.

So, where does Bandwidth fit into all of this?

Clearly, not everybody can do this. Bandwidth is one of just a few companies capable of delivering SMS-enabled numbers nationwide, meaning we give you telephone numbers in the geographically relevant markets you care about. In fact, we’ve been doing it for years, working with established companies and startups alike, giving them access to powerful APIs and customer development resources just like we did for Pinger.

We own and operate our own network and have the relationships firmly established to link your texting application or service directly into the wireless infrastructure, globally. All we do is support our customers’ needs for IP-based communications. As one of the largest providers of phone numbers in the United States, with our SMS-enabled numbers being used by some of the nation’s leading providers, we can help you quickly launch and scale your SMS-based application or service.

In addition, we deliver all of the services you’d expect from a top-tier service provider. For instance, we deploy the nation’s largest all-IP voice network. And we support it 24/7 with a team that doesn’t think you need to know the difference between an ILEC and a CLEC, or a long code and a short code, to build an app that lets a million users communicate in ways the phone companies never dreamed possible.

So what are you waiting for? Connect with one of our telecom experts to get started with SMS-enabled numbers today!

Ready to get started? We're here to help

Bandwidth makes it easy to get SMS-Enabled Numbers

Talk to an expert
Learn more The race to improve the patient experience 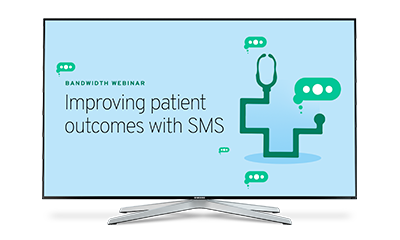 The race to improve patient experience: 4 ways SMS can keep yo…

Watch the
Webinar →
View all resources